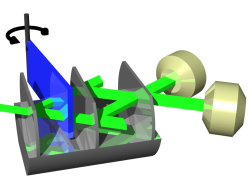 Thermal neutrons passing a slab of material undergo a phase shift and a spatial displacement. Both effects are coupled in most situations. However, using an appropriate configuration of phase shifters they can be decoupled. In addition topics such as dual phase shifters as well as phase shifts of perfect crystal samples are discussed. 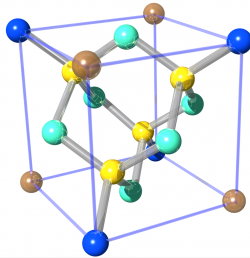 A short Excursion into Crystallography

Generally speaking a single crystal or monocrystalline solid is a material in which the crystal lattice of the entire sample is continuous and unbroken to the edges of the sample. In the case of silicon the lattice is of diamond type, a variation of face centered cubic crystal structure. The diamond lattice can be viewed as a pair of intersecting face-centered cubic lattices, with each separated by 1/4 of the width of the unit cell. 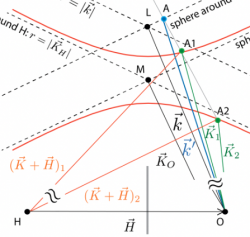 Compared to the geometrical theory, the dynamical theory of diffraction takes the spatial periodicity of the interaction potential in perfect single crystals into account. Thereby the Schrödinger equation has to be solved within this potential. When neutrons illuminate a perfect crystal under near-Bragg orientation conditions, the dynamical theory of diffraction predicts a coherent splitting of the incident wave into four components, with two traveling wave components passing within the crystal in the Bragg direction and two components in the forward (incident) direction. 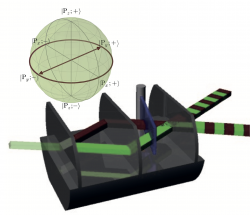 The Interferometer – a Two-Level System