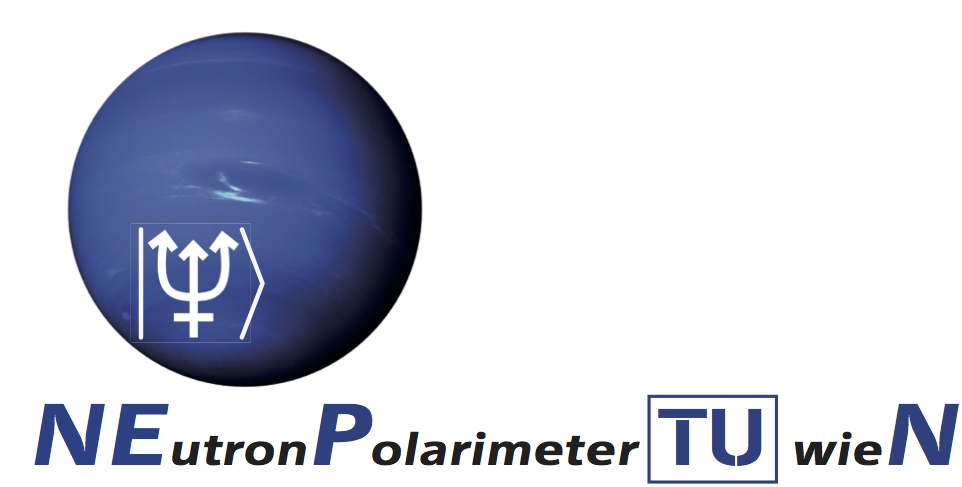 NepTUn is an acronym standing for Neutron Polarimeter TU Wien. The instrument is located at the tangential beam port of the 250 kW TRIGA reactor at the Atominstitut – TU Wien,

Vienna (Austria). The out coming neutron beam is monochromatized by three mosaic crystals made of pyrolitic graphite, selecting the wavelengths 1.7 Å, 2 Å and 2.7 Å, the instrument is located at the 2 Å beam (1.7 Å and 2.7 Å are used for teaching and testing purposes, respectively). The combination of  pyrolytic graphite and tangential beam port, yields high integrated reflectivity a low gamma radiation.
Mach–Zehnder vs Ramsey interferometer: A Mach-Zehnder interferometer (depicted below left) is realized by combining two beam-splitter and two mirrors, It has two input modes referred to as a and b, one of them is initially vacuum. The modes are first mixed by the beam-splitter , being the key element in most optical interferometers. The coherent input state, containing photons,  is transformed by beam-splitter into .

The phase-shifter, acting on mode (b), changes the state in . Finally the modes are mixed again, by , resulting in the final state .The mean photon numbers and recorded by the two detectors and are given by . When is varied, these signals exhibit complementary (phase-opposite) oscillations. All photons are detected in for , and in for respectively, which is obviously the classical result.

For neutrons the similar scheem is found for the polarimeter, which is depicted aside. The first pulse creates a coherent superposition of orthogonal eigenstates, by transforming the initial state to . Before the second pulse   probes it, a tunable phase shift (for example  a static

magnetic field) is applied which gives . After the second pulse the system is found in the final state . The probability of finding finally the system in state () is given by , formally identical to the Mach-Zehnder result. Neutron polarimetry has several advantages compared to Mach-Zehnder (perfect crystal) neutron interferometry, such as insensitive to ambient mechanical and thermal disturbances, yielding high phase stability. Neutron polarimetry has been used to demonstrate fundamental quantum mechanical properties, for example noncommutation of the Pauli spin operator, a number of geometric (or topological) phase measurements  and in a recent experiment a new more general uncertainty relation.

A detailed list of publications of the instrument NepTUn  can be found here.

At  NepTUn the open-source project PIgor (‘Python Igor’ = PIgor – pigor.org) was founded in late 2018. PIgor is a lightweight analysis tool written in python for automatization of data analysis. The source code is available via Github under git clone https://github.com/nicoeinsidler/pigor.