Heisenberg’s uncertainty principle is certainly one of the most famous foundations of quantum physics. According to this principle, not all properties of a quantum particle are determined with arbitrary accuracy. In the early days of quantum theory, this has often been justified by the notion that every measurement inevitably recoils the quantum particle, which disturbs the results of any further measurements. This, however, turns out to be an oversimplification. In our neutron optical experiment different sources of quantum uncertainty could now be distinguished, validating theoretical results our  from Japanese collaborator theoretical physicist Masanao Ozawa. The influence of the measurement on the quantum system is only one reason for the uncertainty observed in the experiment. Heisenberg’s arguments for the uncertainty principle have to be revisited – the uncertainty principle itself however remains valid. Our results have now been published in the journal Nature Physics 1.

The effect of the measurement on the quantum system and the resulting disturbance of the second measurement is not the core of the problem. The uncertainty is rooted in the quantum nature of the particle. Quantum particles cannot be described like a point-like object with a well-defined velocity.

Instead, quantum particles behave as a wave – and for a wave, position and momentum cannot be defined accurately at the same time. In order to describe the fundamental uncertainty and the additional disturbance due to the measuring process, both particle and measurement device have to be treated in the framework of quantum theory as done by the Japanese physics Masanao Ozawa in 2003, leading to a generalized uncertainty principle (see here for details of theory). His equations contains different “kinds of uncertainty”: On the one hand the uncertainty which comes from the measurement, as it disturbs the particle, on the other hand the equations contain the fundamental quantum uncertainty, which is present in any quantum system, regardless of the measurement. Instead of a particle’s position and momentum, the spin of neutrons is measured in our experiment. A schematic illustration of our setup is depicted aside. The neutron polarimetric can ban be seen here: 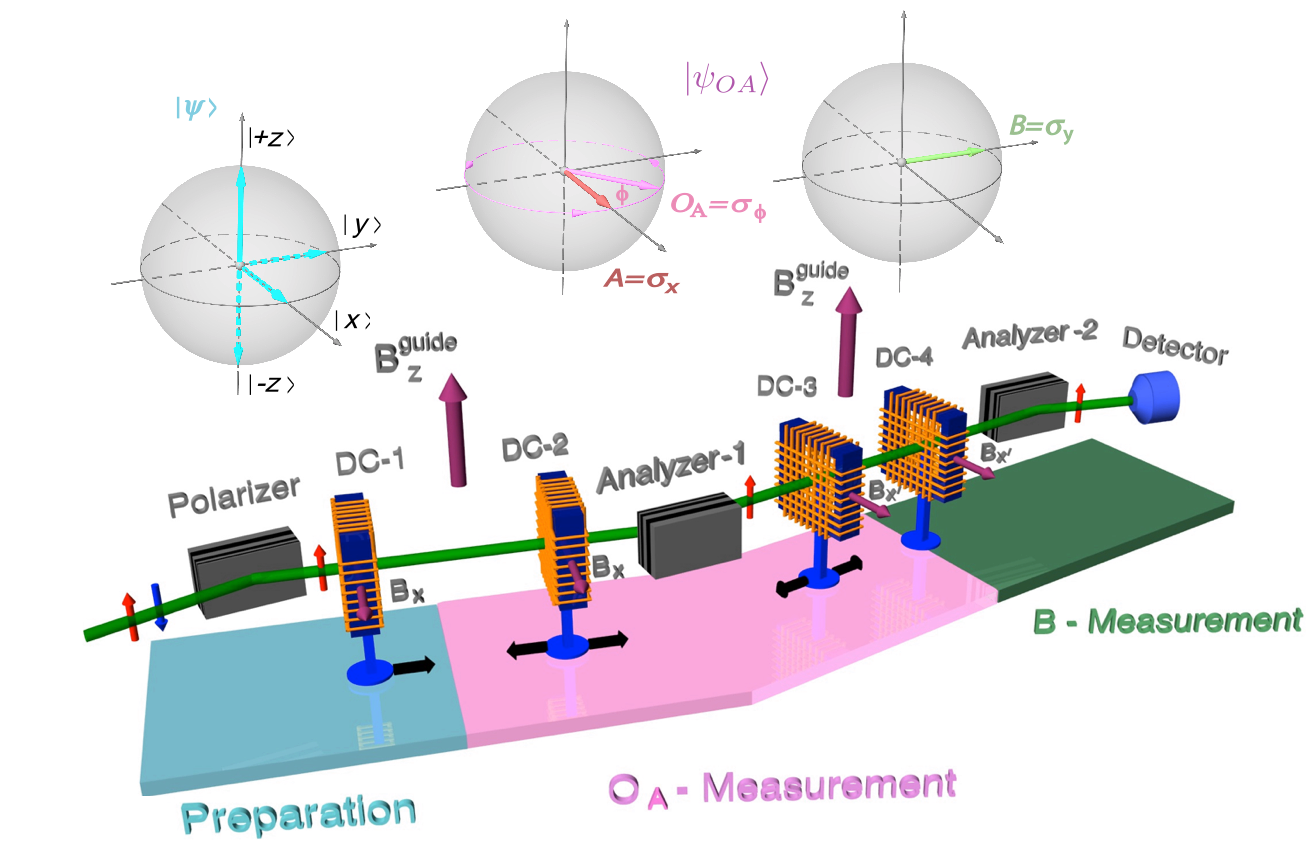 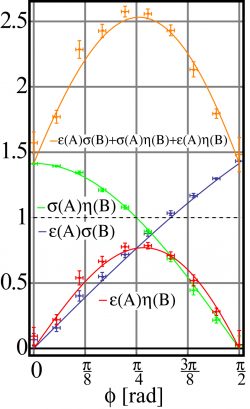 position and momentum. To demonstrate the generalized uncertainty relation, an apparatus consisting of three stages has been designed.  In the first step, the neutron’s spin state is prepared. Then, measurements of the – and -component of the spin are performed successively on every incoming neutron.  An error in the first measurement therefore unavoidably disturbs the second measurement. This effect adds up to the fundamental uncertainty stemming from the quantum nature of the neutron. Preparation and measurement of the neutron’s spin is achieved by exploiting appropriately oriented static magnetic fields together with polarizing super mirrors. Now a systematic investigation of the trade-off between error and disturbance  is performed. Instead of a precise measurement of in –direction, which would disturb a posterior -measurement in y-direction maximally, an approximate measurement of , referred to as , with a deviation angle , being the azimuthal angle on the equatorial plane of the Bloch-sphere, is performed. Error and disturbance are determined from detected count rates (see here for experimental details) of the successive measurements as plotted here. What has been finally observed is the fact that all pairs of error and disturbances (yellow) are located below the bound defined by a naive Heisenberg error-disturbance relation, but reproduce the predictions of Ozawa’s new relation. In summary, we have demonstrated experimental validity of Ozawa’s universally valid error-disturbance uncertainty relation in a neutron polarimetric experiment. The theoretical predictions are reproduced evidently at a high degree of accuracy.

In our next experiment we give a more complete view on how systematic variations of the observables, the settings of the measurement apparatus, and the premeasurement system state influence error, disturbance, and premeasurement standard deviations 2. By studying the whole configuration space the physical meaning of error and disturbance for projective spin- measurements is illustrated  comprehensively. We find parameter regions where Heisenberg’s original formulation is violated as well as the behavior of Ozawa’s relation become manifest as depicted below:

It is worth noting here that error and disturbance are independent from the initial quantum state which follows straightforward from the properties of the Pauli spin matrices, which is also checked experimentally in our paper 2. To summarize: our results demonstrate that Heisenberg’s error- disturbance relation can always be violated for a non-vanishing lower limit. In contrast, Ozawa’s alternative inequality always holds. Furthermore, we conclude that increasing error does not always lead to decreasing disturbance and vice versa in spin measurements. Such a reciprocal behavior occurs only in certain areas and along certain directions.

In a more recent experiment the tightness of Branciard’s inequality, given above along with experimental setup, in comparison with Ozawa’s universally valid 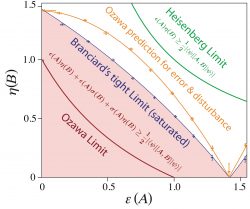 error-disturbance uncertainty relations (see here for theoretical details) is investigated 3. The two inequalities are tested via a joint (more precisely successive) measurement for qubit observables  and  with and to states for which , from which immediately follows for the standard deviations . The observables  and  are represented by the – and -components of the neutron spin-. In order to strengthen Ozawa’s generalized inequality a correction operation is performed to minimize the disturbance. The class of correction operations we study here are unitary transformations in practice realized by an additional spin turner device. As already stated in the actual experiment state preparation after the OA-measurement and correction operation are both performed using DC-3. A rotation of , with  after the projective -measurement (with detuning angle) is performed. As seen in the dark grey curve  and proposed by  this correction operation is indeed optimal, yielding a tight error-disturbance inequality. Unlike in the previous experiments, where we used the three-state-method, in this experiment the so called two-state method was applied (see here for details on the two-state method).