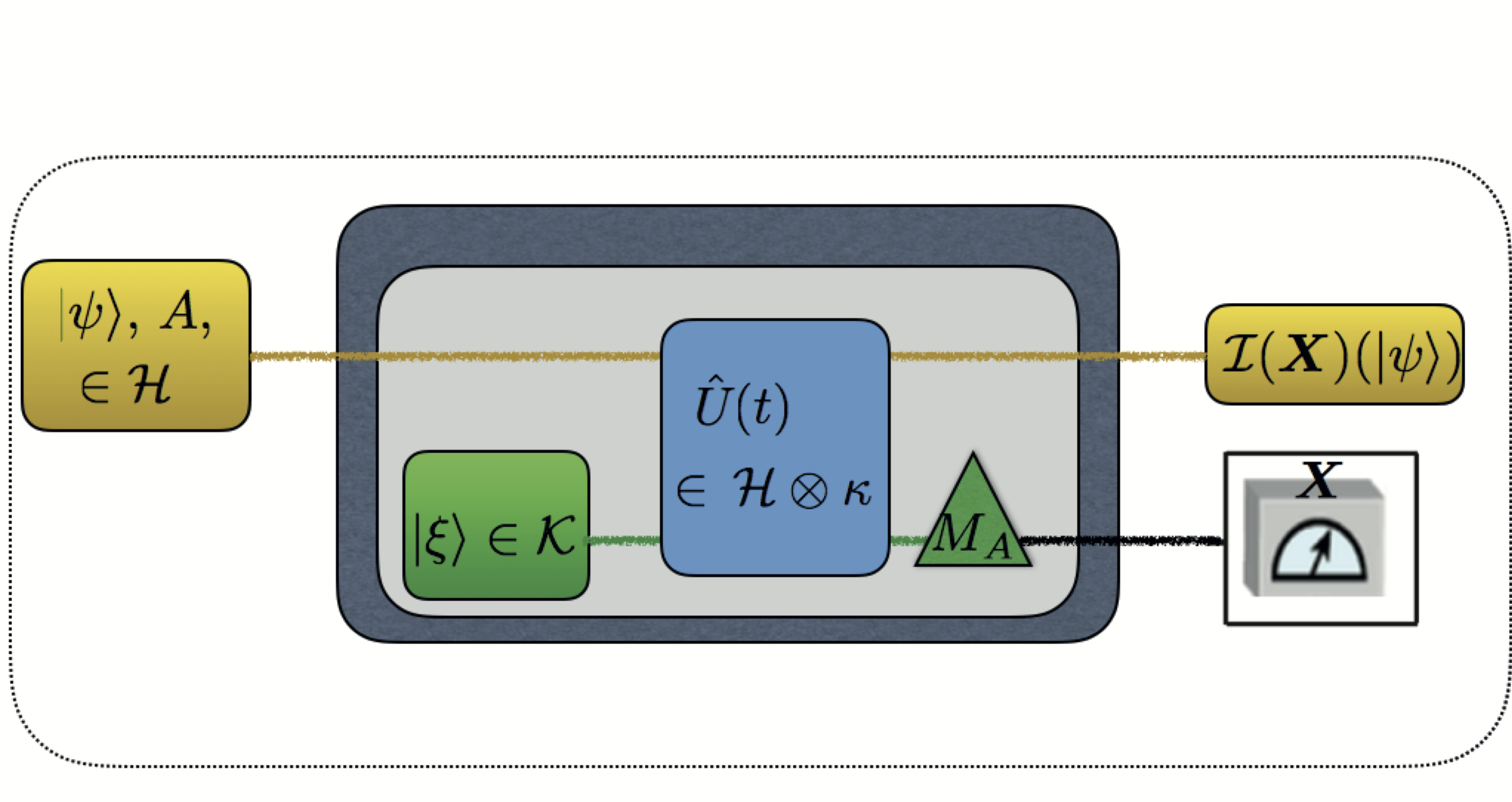 The noise-operator based quantum root-mean-square (q-rms) error of a measuring process , on quantum instrument , is denoted as , where the noise-operator describes how accurately the value of an observable is transferred to the meter observable , during the evolution of the composite system: . Here, is an observable of a system in state of Hilbert space , and is the observable representing the meter of the observer in the probe system (measurement device) in initial state of Hilbert space . Moreover, is the unitary evolution of the composite quantum system . This concept, is usually referred to as indirect measurement model of measuring process and schematically illustrated aside. Furthermore, we have and . The POVM of the measuring process is defined by , where is the spectral projection of for eigenvalues . The moment (mean) operator of the POVM is defined by , and the second moment operator of the POVM is defined by . The measurement is called a sharp or projective measurement of if is projection-valued. In this case, we have and . Otherwise, the measurement is called an unsharp (or generalized) measurement of with . An important property of is that it is determined by (moment operators of) the POVM of in such a way that for general (unsharp), which in the case of sharp (projective) measuresment reduces to .

It is shown by Busch, Lahti, and Werner (BLW) 3 that there exists a measuring process with , whereas does not accurately measure . However, a vanishing error is only expected for an accurate measurement for the completeness of the error measure. Consider a measurement of the observable in a two-level system in the initial state with measuring process described by a POVM with the moment operator given as follows: , , and . We consider the sharp measurement of with the POVM , in this case, one obtains and , so that . However, this particular measurement is not accurate, since and have disjoint spectra: operator has spectral decomposition ,

with eigenvalues and normalized eigenvectors , while , with eigenvalues and normalized eigenvectors . With , being the projector associated with eigenvalue 2, that is , which finally gives . We can then write to express the inaccuracy of the measurement. Thus, the measurement with the POVM does not accurately measure but , which is problematic – or in other words – the quantum root-mean-square error is incomplete. To remedy the incompleteness of the noise-operator based q-rms error, Ozawa proposed a modification of its definition 2 : For any t the quantum root-mean-square (q-rms) error profile for and in is defined as . In order to obtain a numerical error measure the locally uniform q-rms error is given by , resulting in a sound and complete q-rms error . For the given example from above we get and , resolving the problem. 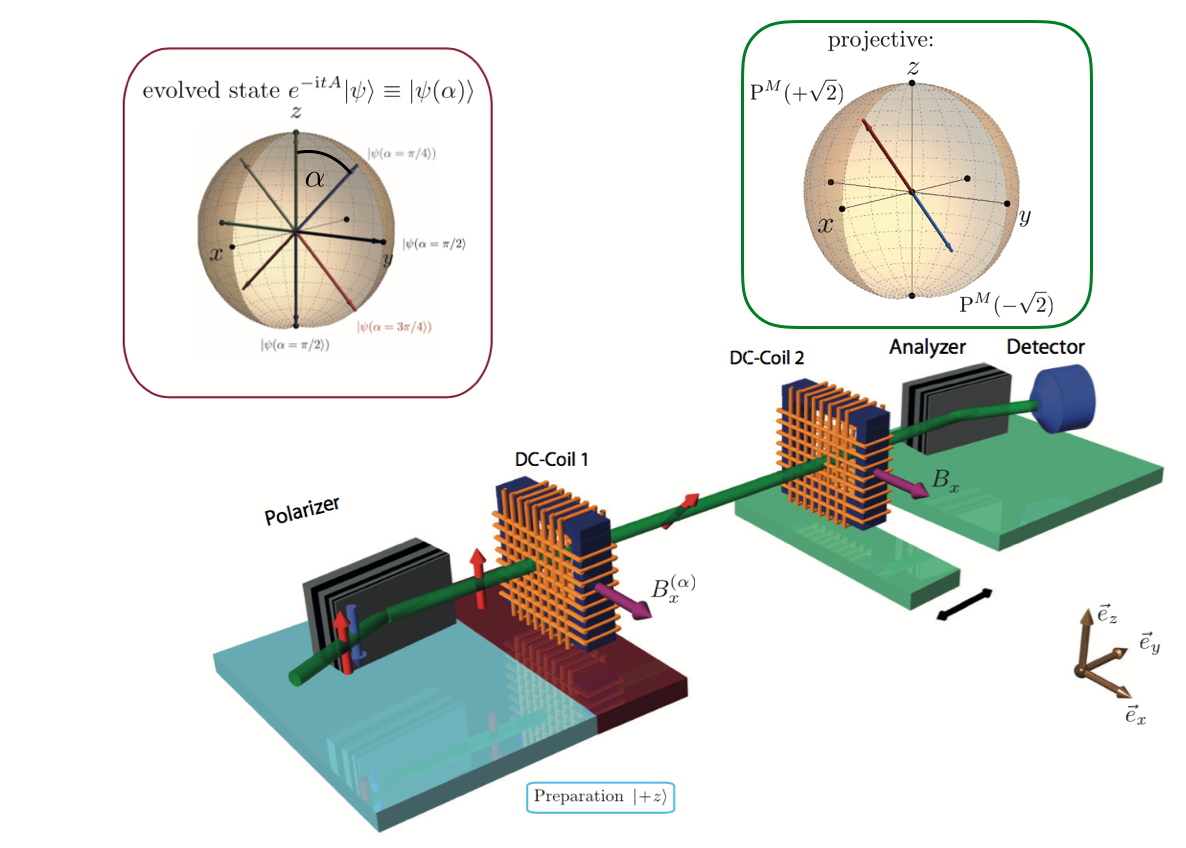 For the actual experiment (setup is depicted above), the time evolution of the initial state , dependent on needs to be analyzed;. The observable can be decomposed as . Hence, the time evolution of the initial state yields , which is simply a rotation about the -axis by an angle (see Bloch sphere). Thus the parametrization has changed from time to an (experimentally adjustable) spinor rotation angle . Applying the well known three-state-method for generalized measurements to obtain the state-dependent q-rms error profile from , where denotes the second moment of , given by . The first term can be symmetrized, applying the operator identity , which gives a sum of experimentally accessible expectation values , where the last term vanishes for projective measurements.

In order to demonstrate the counter example from above, a sharp measurement of is required. The decomposition of into projectors is denoted as , where and with . According to the three-state method the error-profile is obtained by measuring expectation values of , and in state and of in auxiliary states and , which is plotted below for in state (see here for results of the individual expectation vales). 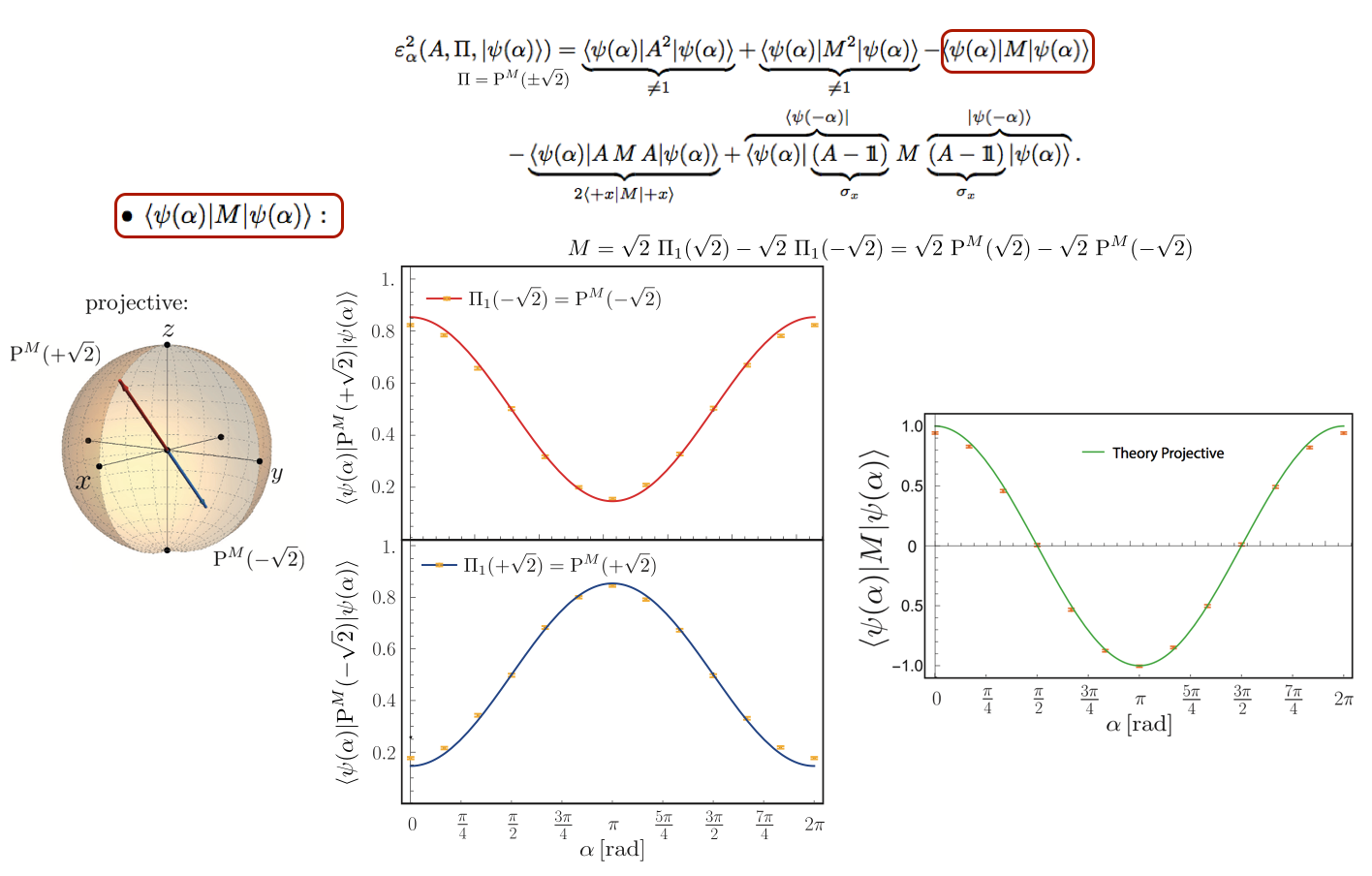 Summing up all five terms finally gives , with locally uniform q-rms error , which is plotted below for 13 values of , together with Bloch sphere of initial state and measurement direction of the projective measurement of M (note that only for Pauli spin matrices  measurements the first two terms of Equation are unity and the error profiles becomes -independent). 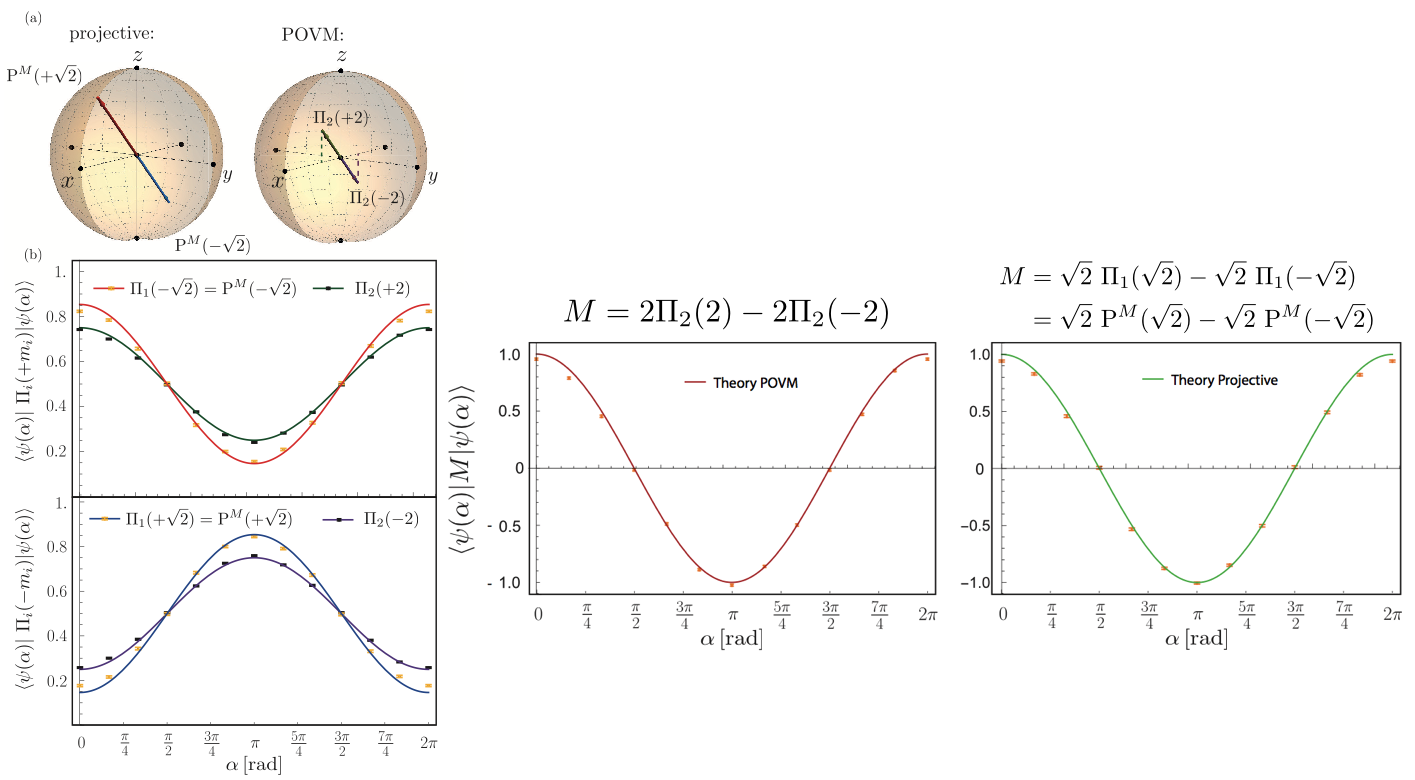 Now, in case of an unsharp measurement the last term of the sum of expectation values, given by is non-zero, since, . Acomparioson of the error profile and locally uniform q-rms error of the unsharp (generalized) and sharp (projective) measuremenr of M is given below.