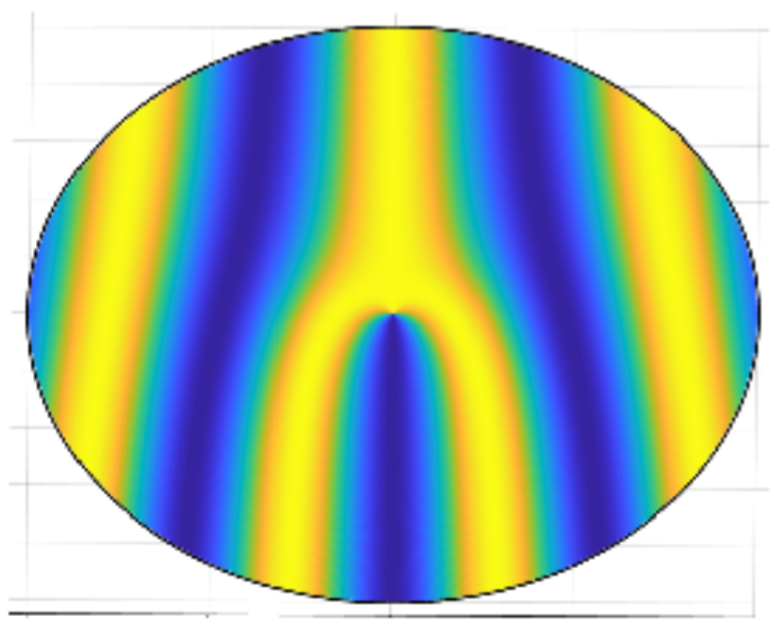 Free quantum particles can posess a property which seems to defy classical physics. Namely they can orbit around a central axis without a restoring force. This property known as free particle orbital angular momentum has been observed in photons, electrons and recently also neutrons. We are investigating the latter for applications in neutron scattering, quantum information and quantum contextuality. If succesfully generated in neutrons orbital angular momentum would represent the 4th available degree of freedom in neutron quantum information/contextuality experiments (in addition to spin, energy and position information).

These more well known forms of orbital angular momenta are traditionally only found in bound systems. Classically this makes sense since rotational motion requires a restoring force. However strictly speaking the mathematical theory in quantum mechanics allows free particles to carry orbital angular momentum. By examining the Schrödinger equation for a free particle in a vacuum (in cylindrical coordinates)  we find that the general solution is given by ,  with eigenvalues . Here represents the Bessel function of first kind and order , while simply represent the amplitude of each mode. Hence a particle carrying a single (or multiple) unit of orbital angular momentum can simulateneously be in an eigenstate of the free space Schroedinger equation. In other words an eigenfunction of the operator can simulataneously be an eigenfunction of the free space Hamiltonian: . So rather strangely quantum mechanics predicts that a free particle can orbit around the component of its momentum vector in the absence of any restoring forces. As is often the case in physics interesting mathematical expressions have real world counterparts. In 1991 such twisted wavefronts, carrying a single unit of OAM, were observed in free photons. Starting from a superposition of azimuthal modes non-linear effects in an optical medium were exploited to filter the modes 1. It was not until 1994 that a pure mode could be converted to a different single integer mode. This was accomplished by means of a spiral phase plate (see figure below) 2. An SPP is simply an optical medium whose thickness varies azimuthally such that a wave packet passing through the center of an SPP picks up an azimuthal phase.

Schematic of a spiral phase plate which transforms a photon with no OAM into a twisted vortex beam carrying non-zero OAM. By E-karimi – Own work, CC BY-SA 3.0, https://commons.wikimedia.org/w/index.php?curid=16631562

While interesting in itself, the phenomenon of photon OAM can be understood classically with the theory of electromagnetism and the Maxwell equations. It wasn’t until 2010 that orbital angular momentum was detected in free matter waves 3. These states were generated in electrons using an electron microscope and a spiral phase plate constructed out of graphite thin films. Orbital angular momentum has also been observed in a more limited way in neutrons 4. This first observation was accomplished in a neutron interferometer using an aluminum spiral phase plate. In contrast to electrons and photons where the orbital angular momentum is intrinsic, that is where the quantization axis of the OAM is parallel to the  component (i.e. the mean propagationd direction) of the particle momentum, the neutron OAM observed to date is extrinsic, where the quantization axis of the OAM is defined by the normal vector of the spiral phase plate or beam twister device.

Since that time additional methods for generating neutron OAM have been discussed and developed. Here we focus on the techniques which not only generate OAM but also entangle said degree of freedom with the neutron spin, thereby generating spin-orbit states. We will start by looking at the two closely related magnetic techniques. The first of which is the quadrupole magnet 5, which couples to the neutron magnetic moment, via the Zeeman effect: , where is the gyromagnetic ratio and are the Pauli spin matrices. The quadrupole field is simply given by a gradient in and direction . Working out the potential we find , or in cylindrical coordinates where the entangling action between spin and OAM becomes more clear: , where and are the spin and OAM raising/lowering operators respectively. The second magnetic technique for spin-orbit production in neutrons makes use of a series of magnetic prism pairs 6. The prism effectively creates a one dimensional magnetic gradient, as opposed to the two dimensional gradient seen in the quadrupole 7. The fields of each prism in one pair are orthogonal to one another. According to the Suzuki-Trotter expansion an infinite series of such pairs would mimic the quadrupole action. If cut off at a lower bound a phase diagram of spin orbit lattice states are generated 8, 9. Such a phase diagram is shown below in the figure below. If the coherence length of the test particle is sufficiently large these states are intrinsic. For neutrons however both the quadrupole and the gradient method generate extrinsic orbital angular momentum, since the neutron coherence length is much smaller than the beam size. While extrinsic spin-orbit states are certainly useful for neutron small angle scattering experiments like in SEMSANS, there is still a need for intrinsic OAM states for other scattering experiments and quantum information.

One proposed method to generate intrinsic spin-orbit states is by the Schwinger interaction between the neutron magnetic moment and a static electric field 10. In our recent work 11 we demonstrate that spin-orbit entangled states are generated in neutral, non-zero magnetic moment, spin 1/2 particles, i.e., neutrons, travelling through an electric field. This interaction is relativistic in nature, arising from the relative motion between the neutron and an electric field. After all the only difference between an electric charge (source of electric field) and a current (source of magnetic field) is motion. Hence an observer moving through an electric field will experience a magnetic field in his rest frame. This magnetic field is given by , for . The neutron couples to this magnetic field via the Zeeman effect leading us to derive the Schwinger potential for low velocities , with the coupling constant. Spin-orbit states are generated when the electric field is polarized along the flight direction of the particles. You may be inclined to think that in this case the coupling is zero since , however due to the uncertainty principle it is impossible for the momentum to be perfectly parallel to the electric field. The uncertainty principle which when it comes to position and momentum really arises from Huygens principle will ensure that the beam always has a non zero divergence, which in turn leads to a non-zero Schwinger coupling. We can more easily see the spin-orbit entangling action if we assume (with neutron propagation in -direction) and transforming the potential to -space . So the Fourier transformed potential seen by a neutron in a static longitudinal electric field is identical to the potential of a magnetic quadrupole. The approximate real space solution of a neutron, initially in the zeroth OAM state, for such a potential is given by where the index refers to the spin state, denotes the beam divergence and denotes the initial amplitude of the respective spin state. Below we show an animation of a wavefunction traversing an electric field. One can see that the state is initially described by a pure zeroth order Bessel of first kind, which mixes and evolves into a first order Bessel over time as it traverses the medium. The OAM in this case is more likely to be intrinsic, since the effect of the Electric field is independent of the ratio between beam coherence and beam size (in contrast to the magnetic field methods).

Up to this point we have discussed various methods to generate intrinsic and extrinsic orbital angular momentum states in free neutrons. All of these states are longitudinal, that is to say, the quantization axis of the OAM is parallel to the propagation direction. A question arises on whether or not orbital angular momentum of free particles can be transverse to the propagation direction. The Schroedinger equation for free particles in vacuum seems to predict that the answer is yes! Looking at the simple planewave solution in cylindrical coordinates , which can be expanded as an infinite series of cylindrical modes carrying OAM according to the Jacobi Anger expansion . The expectation value for transverse OAM of the plane wave is zero, however we can multiply the solution by the OAM raising operator , thereby shifting the expectation value and the index by one: As shown at the beginning of this document this is also a solution of the free space Schrödinger equation and this solution has an average transverse OAM of one unit of . This planewave carrying one unit of transverse OAM is shown below in a figure. We expect that these transverse OAM states can be generated in neutrons which are traversing a transversally polarized static electric field.

If instead of plane waves Gaussian wave packets are considered we get the following picture for the same scenario:

We have discussed the distinction between intrinsic/extrinsic and  longitudinal/transverse OAM and the various techniques used to generate these states. Finally we must look at methods for measuring neutron orbital angular momentum. In general there are a few ways to go about this. The simplest way is to measure the phase profile of the wave via interferometry as was done in the original neutron experiment 4. In the case of neutrons this method is ill-suited for intrinsic states, since the spatial resolution required excedes technical limitations at this time. Another consideration comes from the angular doppler shift. If a wave carrying OAM is measured in a rotating frames as opposed to an inertial frame the frequency will be shifted by , with the OAM of the wave and the angular velocity of the rotating frame. This angular Doppler shift can also be understood as the Sagnac effect 12. However this method requires significant time resolution and a measuring device capable of spinning fast enough. A final method, requiring entanglement, makes use of a mode converter which flips the sign of the OAM 13. Using this method we do not require spatial or temporal resolution. In optics this mode conversion is often accomplished by means of a dove prism. In the case of neutrons mode conversion is achieved by means of a triple reflection, which effectively rotates the plane perpendicular to the neutron propagation direction. For neutrons with transverse OAM we envision a polarized beam is passed through a spin-orbit entangler (i.e. an electric field), a mode converter and a disentangler. Finally the beam is spin analyzed. If the mode converter flips the OAM, the disentangler will fail thereby destroying the spin intereference, while if the converter does not flip the OAM the disentangler will restore the original state, thereby enabling interference. Hence by rotating the mode converter around the beam-axis we will see modulation appear at the detector. The setup is shown in a figure below.

Schematic of the proposed concept experiment to demonstrate the generation of transverse OAM by electric fields. The setup consists of a polarizing supermirror (a), an electric beam twister (b), a set of non polarizing mirrors (mimicing a dove prism) which can be rotated around a common beam axis (c), another beam twister with opposite polarity (d) and a supermirror for spin polarization analysis (e).